When talking about repositioning cruises through Panama Canal, the predicament here is that most Panama Canal transition cruises are full transits (crossings with one-way itineraries). Panama Canal cruise ships are usually leaving either from Florida or California ports. Transition sailings usually last for about 2-weeks.

These are two special “Panama Canal ship relocation” hints for you (serving almost like shortcuts): the always funny one is “follow the money”, and the not so funny one is “mind the season”.

As to the money part, you’ll know the Panama Canal reposition cruises by their ticket prices. Deals will vary greatly (depending on the line, ship, and cabin category), but always with pleasantly low rates which could be easily defined as “top-luxury inexpensive to really really cheap”. 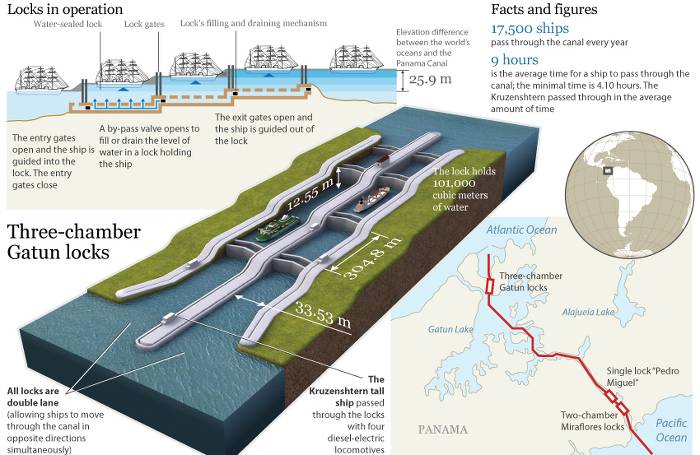 These are two Panama Canal related links. For all things Panama-related – the Republic of Panama official website VisitPanama.com. For all history-technology-facts stuff – see this Wikipedia link. For details on itinerary and to compare prices (indicative rates) follow the line-links from the table below.

Know that with time prices on Panama Canal repositioning cruise deals usually go down with time. Still, the economic law of “Supply And Demand” will always rule – cruise lines will price their deals and cabin categories accordingly. So good luck with those, and happy Panama Canal “reposition” vacations!